Are there signs of mould appearing on your home?

If so, you may wish to consider these points.

1. Roadside dust, dirt, mould, grime, dead foliage, moss, bird droppings, insects, cobwebs, smog and pollution:  all of these accumulate gradually, even imperceptibly over time.  When you become clearly aware that your home has a layer of dark film enveloping it, that layer has already been taking a toll, on the house itself as well as on the people and pets who live there.

2.  Some of the harm caused by the build-up of grime on the outside of a house can affect the condition of the home's interior. Mould and mildew in particular will continue to grow and to seep through the walls. It is essential to clean the outside of your home before you begin noticing dark stains, mould spores, damp patches and even bulges on the inside of any walls. Simply wiping down the inside walls will not end the problem.

3.  Health problems that are caused or aggravated by mould in the home include breathing difficulties, from coughing and wheezing to asthma attacks and other serious lung conditions. Mould also contributes to eye and skin irritations, sore throats, sleeping difficulties and allergies, and it has been linked with depression. Pressure washing your home of all traces of mould on the outside walls is one clear step towards prevention of such problems or towards resolving them if they are already present.

4.  Persons most at risk include children and infants, older people, those with existing health problems and anyone who spends a significant amount of time inside their home.

5.  If your home has been affected by flooding at all, a thorough pressure washing is essential to protect the health of occupants and to restore the condition of the building itself.

6. Pressure washing professionals will be able to advise on, and to treat, specific mould problems around the exterior of your home. Certain detergents used in your pressure wash can help prevent the return of mould, once it has been removed. 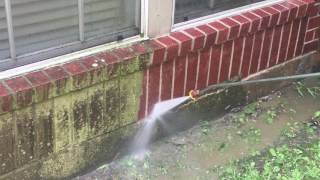 To pressure wash an older brick home safely, a small amount of preparation can be very helpful.

How to remove oil stains from a concrete driveway

A pressure washer can help with removing stains from a concrete driveway and restoring its condition and appearance. 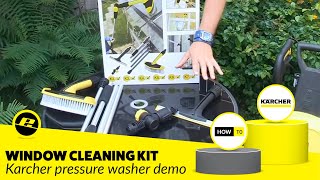 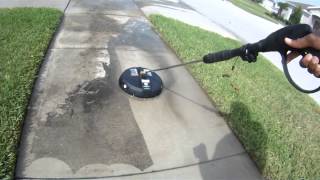 Useful Attachments for Your Pressure Washer

These pressure washer attachments are particularly helpful. They save you time and effort, increase safety, and reduce stress during the task. 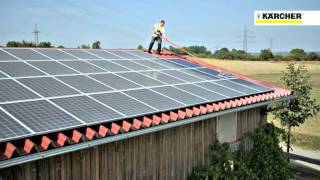 How to clean solar panels

If the surfaces of solar panels become scratched this affects their ability to generate power. How to clean them safely? 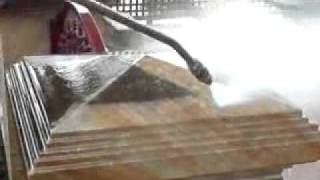 Pressure washing a sandstone building with too strong a force may cause damage, particularly if the sandstone is inadequately sealed. 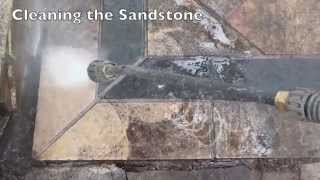 Pressure washing sandstone pavers is a simple and rapid way of cleaning them, with brilliant results. 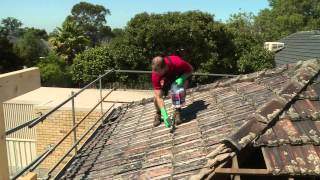 For cleaning most roofs, use a soft wash. Within that context, different roofing materials require different cleaning methods.

Should you pressure wash your own roof? Or call in your local professional roof cleaning team? 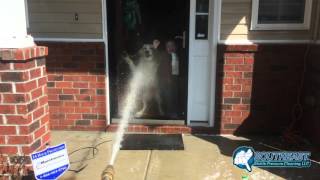 Keep pets and small children at a safe distance while you are pressure washing.